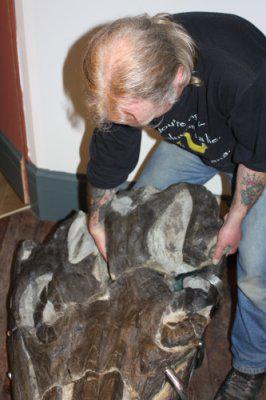 Lyme Regis is the home of palaeontology and the place where Britain’s greatest fossil hunter, Mary Anning discovered the first ichthyosaur and plesiosaur in the early 19th century. The town is situated at the heart of the Jurassic Coast, England’s only Natural World Heritage Site.

Museum Director David Tucker said, “This species of ichthyosaur, called Temnodontosaurus platydon is the same species as the first great ichthyosaur discovered by Mary Anning 200 years ago. Mary Anning’s fossil is in the Natural History Museum, and Lyme Regis has waited two centuries to obtain a similar, large specimen. The fossil was discovered within metres of the museum. It’s important that museums along the Jurassic Coast are able to display the amazing fossil treasures that are still being found along the coast”.

The fossil was found by local collector, Mike Harrison and was purchased for the museum with the support of the Heritage Lottery Fund and Prism Grant Fund.

Lyme Regis Museum is built on the site of Mary Anning’s house and was founded in 1902 by the family of Elizabeth Philpot, Mary Anning’s friend and significant fossil hunter in her own right. The museum has recently featured on ‘Countryfile’ and runs fossil walks, led by expert geologists giving our visitors a chance to find their own Jurassic Coast treasures.

For further details – contact David Tucker on director@lymeregismuseum.co.uk or 01297 443370